Which type of battery for smartphone is better: Li-Ion or LiPo ?

Did you ever think about why your phone works at all? Probably not. But, if you think about it, all portable gadgets rely on a battery to keep ticking – and some have better battery life than others. That’s why we’re going to take a peek at what keeps your phone ticking and why some batteries do better than others.

On the basis of chemistry used for ions carrying electrolyte material, Lithium battery can be classified into Lithium ion and lithium Polymer.

This flow chart will clear the doubts: 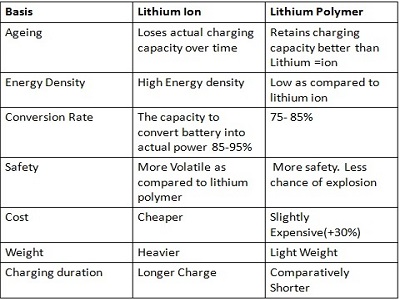 Considering the requirements of the smart phone in terms of weight, shape, size, energy density, usage etc , we have to decide, which is best in the case.

Why we need a polymer lithium-ion battery ?

However, in the past ten years, with the rapid development of communication technology, mobile phone color screen technology, MMS technology, Bluetooth technology and camera technology have appeared successively, which puts higher requirements on the capacity, volume, weight and electrochemical performance of the battery. Traditional liquid lithium batteries have become increasingly unable to adapt to new demands. The emergence of a new polymer lithium-ion battery (Li-Polymer) caters to this demand. Polymer lithium battery is a third-generation lithium-ion battery developed on the basis of the original steel shell and aluminum shell battery. It is lighter, thinner and has higher energy density. It is accepted by domestic and foreign communication terminal manufacturers and design companies.

They are common in home electronics. They are one of the most popular types of rechargeable batteries for portable electronics, with a high energy density, tiny memory effect and low self-discharge. They are used in military, battery electric vehicle, and aerospace applications.

These batteries provide a higher specific energy than other lithium battery types and are being used in applications where weight is a critical feature — like tablet computers, cellular telephone handsets, or radio-controlled aircraft.

Although the lithium-polymer battery is sleeker and thinner, lithium-ion batteries have a higher energy density and cost less to manufacture.

Finally, with new chemicals and such being added to these batteries often, who knows which will come out on top in the long run.


Read this article. It explains mostly everything about these 2 types of batteries. It's a good read.
Lithium Ion Battery vs. Lithium Polymer Battery – What’s the Difference?

How much voltage should be used to charge a 3.7V lithium battery? June 2, 2021
Latest

Does the laptop have to be plugged in all the time? It depends on the usage environment January 11, 2022

Guide to the use of electric vehicles in winter, how to make lithium-ion batteries active? December 27, 2021

In 2021, the cost of battery cells will rise by more than 60%, and the overall price increase of the battery industry is imperative December 16, 2021

The world's first aluminum-ion solid-state battery is mass-produced, which is half cheaper than lithium batteries December 7, 2021