How does the Lithium battery protection circuit board work?

The lithium battery protection circuit board is mainly composed of protection IC (overvoltage protection) and MOS tube (overcurrent protection), and is a device used to protect the safety of lithium battery cells. Lithium batteries are widely used by people for their large discharge current, low internal resistance, long life, and no memory effect. Lithium-ion batteries are strictly prohibited from overcharging, overdischarging, and short-circuiting during use, otherwise it will cause the battery to catch fire and explode. Therefore, when using rechargeable lithium batteries, there will be a protective circuit board to protect the safety of the batteries.

Lithium-ion battery protection circuit boards have different circuits and parameters according to different ICs, voltages, etc. The commonly used protection ICs are 8261, DW01+, CS213, GEM5018, etc. Among them, Seiko's 8261 series have better accuracy and of course the price is more expensive. The latter are all produced in Taiwan. The domestic secondary market basically uses DW01+ and CS213. The following is an explanation with DW01+ with MOS tube 8205A (8pin): 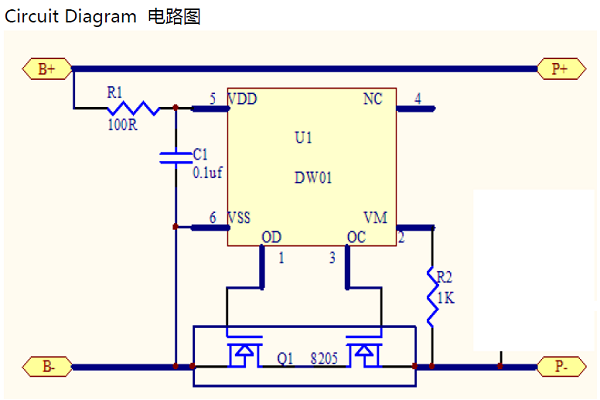 The normal working process of the lithium-ion battery protection circuit board is:

When the cell voltage is between 2.5V and 4.3V, the first pin and the third pin of DW01 both output high level (equal to the supply voltage), and the second pin voltage is 0V. At this time, the voltage of pin 1 and pin 3 of DW01 will be applied to pins 5 and 4 of 8205A respectively. The two electronic switches in 8205A are in the conducting state because their G poles are connected to the voltage from DW01, that is Both electronic switches are in the open state. At this time, the negative pole of the battery is directly connected to the P- terminal of the protection board, and the protection board has a voltage output.

In the process of external discharge of the protection circuit board, the two electronic switches in the 8205A are not completely equivalent to two mechanical switches, but are equivalent to two resistors with very small resistance, and are called the conduction internal resistance of the 8205A. The on-resistance of each switch is about 30m\U 03a9 and a total of about 60m\U 03a9. The voltage applied to the G pole actually directly controls the on-resistance of each switch. When the G pole voltage is greater than At 1V, the conduction resistance of the switch tube is very small (tens of milliohms), which is equivalent to the switch being closed. When the voltage of the G pole is less than 0.7V, the conduction resistance of the switch tube is very large (several MΩ), which is equivalent to The switch is off. The voltage UA is the voltage between the on-resistance of 8205A and the discharge current. When the load current increases, UA will inevitably increase. Because UA0.006L×IUA is also called the tube voltage drop of 8205A, UA can be abbreviated to indicate the size of the discharge current. . When it rises to 0.2V, it is considered that the load current has reached the limit value, so the output voltage of pin 1 is stopped, so that the voltage of pin 1 becomes 0V, the discharge control tube in 8205A is closed, and the discharge circuit of the cell is cut off. Discharge control tube. In other words, the maximum allowable output current of DW01 is 3.3A, which realizes over-current protection.

The reason why lithium battery (rechargeable type) needs protection is determined by its own characteristics. Since the material of the lithium-ion polymer battery itself determines that it cannot be overcharged, overdischarged, overcurrent, short circuited, and ultra-high temperature charging and discharging, the lithium battery components always follow a delicate protection circuit board.

What is a low temperature lithium battery? September 26, 2022

What is a lithium-ion battery energy storage system? September 7, 2022

What are the types of cylindrical lithium batteries? September 5, 2022